On to new habits. [Press Interview] 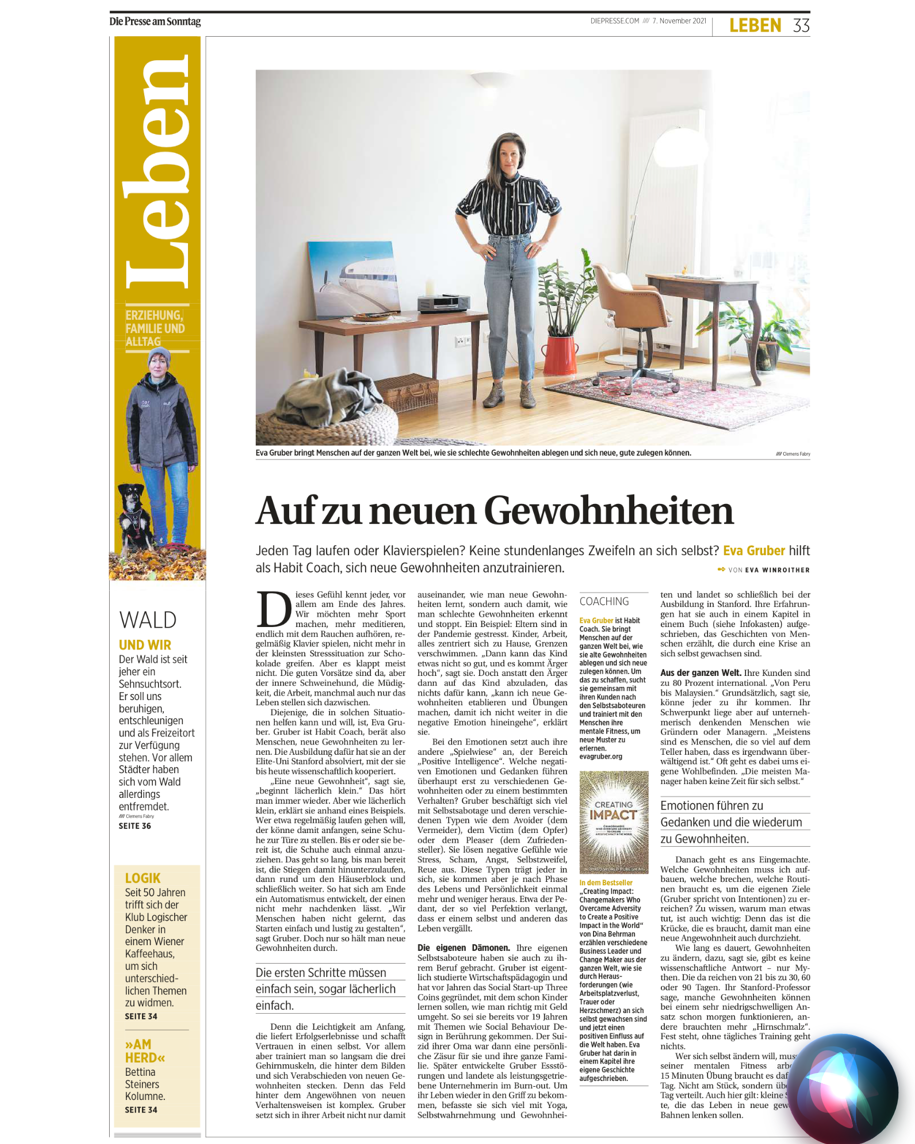 This is another great piece of journalism!

Thanks to Eva Winroither from Die Presse for interviewing me about “the power of habits”.

Yes, this might be a hint towards the end of the year, and coming up with new intentions!

On to new habits

Running or playing the piano every day? No doubts about yourself for hours? As a Habit Coach, Eva Gruber helps to develop new habits.

Everyone knows this feeling, especially at the end of the year. We want to do more sports, meditate more, finally quit smoking, play the piano regularly, and no longer reach for chocolate in the smallest stressful situation. But it usually doesn’t work. The good intentions are there, but the weaker self, the tiredness, the work, sometimes just life, intervene.

The person who can and wants to help in such situations is Eva Gruber. Gruber is a Habit Coach, and is supporting people to learn new habits. She completed her education for this at the elite Stanford University, with which she continues to cooperate scientifically to this day.

“A new habit,” she says, “starts out ridiculously small.” You hear that over and over again. But how ridiculously small, she explains using an example. If you want to go running regularly, you can start by putting your shoes by the door. Until you are ready to put the shoes on. This goes on until you are ready to run down the stairs in them, then around the block and finally further. In the end, an automatism has developed that makes you stop thinking. “We humans haven’t learned to make starting easy and fun,” says Gruber. But this is the only way to keep up new habits.

Because the lightness at the beginning provides a sense of achievement and creates trust in yourself. But above all, you slowly train the three brain muscles that are behind the formation and finalisation of new habits. Because the field behind getting used to new behaviors is complex. In her work, Gruber not only deals with how to learn new habits, but also how to recognize and stop bad habits. An example: Parents are stressed in the pandemic. Children, work, everything is centered at home, boundaries are blurred. “Then the child is not capable of doing something that well and anger arises,” she says. But instead of dumping the anger on the child, who can’t help it, “I can establish new habits and do exercises so that I don’t go further into the negative emotion,” she explains.

Her other “playground”, the “Positive Intelligence” area, also starts with the emotions. Which negative emotions and thoughts lead to different habits or to a certain behavior in the first place? Gruber deals a lot with Mental Self-Sabotage and its different types such as the Avoider, the Victim or the Pleaser. They trigger negative feelings such as stress, shame, fear, self-doubt, remorse. Everyone carries these types within themselves, but they come out stronger and weaker depending on the phase of life and personality. For example the Stickler who demands so much perfection that s/he spoils the life of oneself and others.

Your own demons. Her own Mental Saboteurs also got her into her profession. Gruber actually studied business education and founded the social start-up Three Coins years ago, with which youth should learn how to handle money properly. So she came into contact with topics such as social behavior design 9 years ago. Her grandmother’s suicide was a personal turning point for her and her whole family. Gruber later developed eating disorders and ended up suffering from burnout as a performance-driven entrepreneur. In order to get her life back under control, she dealt a lot with yoga, self-awareness and habits and ended up with her education at Stanford. She has also written down her experiences in a chapter in a book (see info box) that tells stories of people who have grown in themselves through a crisis.

From all over the world. 80 percent of your customers are international. “From Chile to Malaysia.” In principle, she says, anyone can come to her. However, her focus is on entrepreneurially minded people such as founders or managers. “Most of the time it’s people who have so much on their plate that at some point it’s overwhelming.” Often it’s about your own wellbeing. “Most managers don’t have time for themselves.”

Then it goes to the nitty-gritty. Which habits do I have to build, which ones to break, which routines do I need to achieve my own goals (Gruber speaks of intentions)? Knowing why you’re doing something is also important: Because that’s the crutch you need to get through a new habit.

How long it takes to change habits, she says, has no scientific answer – just myths. They range from 21 to 30, 60 or 90 days. Her Stanford professor says that with a very low-threshold approach, some habits can work tomorrow, others need more “brainpower”. One thing is certain, nothing works without daily training!

If you want to change yourself, you have to work on your Mental Fitness. It takes 15 minutes of exercise a day. Not in one piece, but spread over the day. Here, too, the following applies: Small steps that should guide life into new, familiar paths.

Eva Gruber is a Habit Coach. She supports people around the globe on how to break old habits and create new ones. To do so, her clients and her look for their Mental Saboteurs and train their Mental Fitness in order to learn new behavior patterns. https://evagruber.org/

In the bestseller “Creating Impact: Changemakers Who Overcame Adversity to Create a Positive Impact in the World” initiated by Dina Behrman, various business leaders and change makers from all over the world tell how they have personally grown through overcoming challenges (such as job loss, grief or heartbreak) and now have a positive impact on the world. Eva Gruber wrote her own story in one chapter.

Reach out to me!
Let’s pick up your questions or start the needed change!