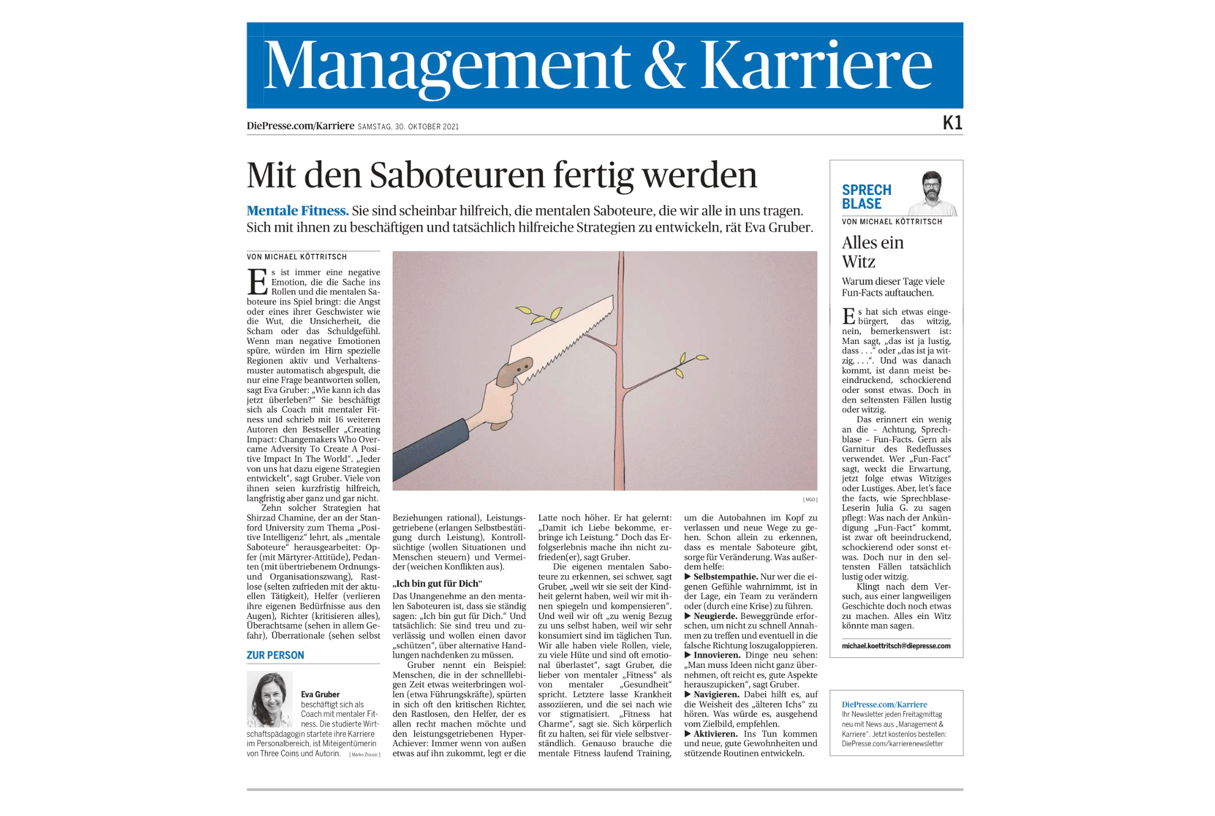 Being interviewed by the press is exciting! But being truly listened to and understood in my message was my big pleasure this time!

I thank Michael Köttritsch from Die Presse (Management & Career) for this to-the-point story.

Read this great article (in German here or via the picture) to learn about our well needed Mental Fitness in times of a challenge, my new book Creating Impact, and my work as a Habit Coach.

Dealing with the saboteurs

Mental Fitness. They are apparently helpful, the Mental Saboteurs we all have within us. Eva Gruber advises dealing with them and developing actually helpful strategies.

It is always a negative emotion that gets things rolling and the Mental Saboteurs into play: fear or one of its siblings such as anger, insecurity, shame or guilt. If you feel negative emotions, special regions in the brain would become active and behavior patterns automatically unwound, which should only answer one question, says Eva Gruber: “How can I survive this?” She deals with Mental Fitness as a coach and wrote with 16 other authors the bestseller “Creating Impact: Changemakers Who Overcame Adversity To Create A Positive Impact In The World”. “Each of us has developed our own strategies for this,” says Gruber. Many of them are helpful in the short term, but not at all in the long term.

Shirzad Chamine, who teaches “Positive Intelligence” at Stanford University, has worked out ten such strategies as “Mental Saboteurs”: the Victim (with a martyr attitude), the Stickler (with exaggerated need for order and organization), the Restless (rarely satisfied with current activity), the Pleaser (lose sight of their own needs), the Judge (criticize everything), the Hyper-Vigilant (see everything in danger), the Hyper-Rational (see relationships as rational), the Hyper-Achiever (gain self-affirmation through performance), the Controller (want to steer situations and people) and the Avoider (avoid conflicts).

The unpleasant thing about the Mental Saboteurs is that they keep saying: “I am good for you.” And indeed: They are loyal and reliable and want to “protect” you from having to think about alternative actions.

Gruber gives an example: People who want to advance something in fast-moving times (such as managers) often feel the critical Judge, the Restless, the Pleaser who wants to please everyone and the performance-driven Hyper-Achiever, who raises the bar even higher when approached by something from outside. The Hyper-Achiever has learned: “To get love, I perform.” But the sense of achievement does not make him/her (more) satisfied, says Gruber.

It is difficult to recognize one’s own Mental Saboteurs, says Gruber, “because we have learned them since childhood, because we mirror and compensate with them”. And because we often “have too little relation to ourselves”, because we are very consumed in our daily activities. We all have many roles, many, too many hats and are often emotionally overloaded”, says Gruber, who prefers to speak of “Mental Fitness” than “Mental Health”. The latter is associated with illness, and it is still stigmatized. “Fitness has charm,” she says. Keeping physically fit is self-evident for many. Mental Fitness needs constant training in order to leave the highways in the head and to break new ground. Just recognizing that there are Mental Saboteurs causes change. What else can help:

ABOUT THE INTERVIEWED EXPERT

Eva Gruber deals with Mental Fitness and Behavior as a Habit Coach. The business education graduate started her career in human resources, is also a co-owner of Three Coins and an author.

Reach out to me. Let’s chat!